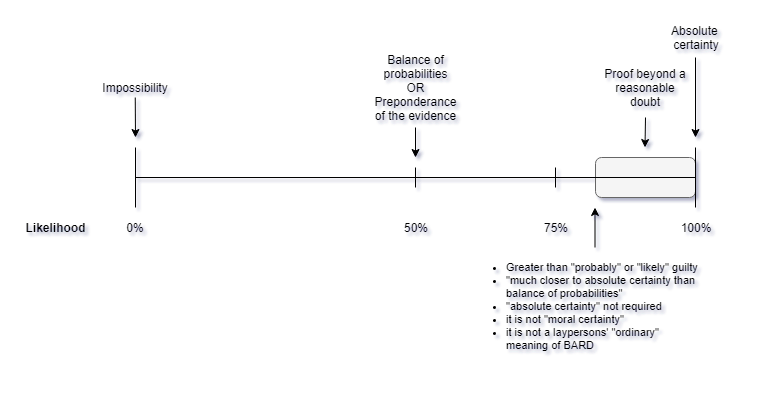 You’ve been reviewing two criminal cases related to offenders in Alberta and Saskatchewan. It’s one thing to study and understand a single criminal trial and outcome, but to make comparisons to another requires more complex thinking and analysis of the facts.

Below are a list of factors to consider in your review of both cases:

For someone to be found guilty of a crime, you must prove two parts of the offence: guilty act and guilty mind.

Case Study on Willful Blindness – one of the tests of mens rea:

We’ve discussed how Criminal Law is unique among the other categories of Law in Canada. In this section, we’ll start looking at the specifics of it.

Some of the Big Ideas you should focus on in this section include:

Civil Suits That Followed Criminal Ones: (overlap of criminal law and private)

Starting the Criminal Law Unit next, we’ll read through several news articles of events that have a connection to legal rights. You will have a Socrative quiz open to add your initial reactions anonymously and build from those comments added.

To understand the rights and freedoms developed within the Charter document, you’ll read through an explanation of each important section, summarize the important parts of it, and summarize a Charter case related to that section.

The Canadian Charter of Rights is more than three decades old already and our understanding and application of its rights and freedoms have been interpreted in many ways by significant legal cases and challenges.

It is one of the most widely misunderstood elements of our political and legal system in Canada, though, so it’s is important to get a clear/correct understanding of what it offers and doesn’t offer Canadians.

2.1 Introduction: Summary of the Charter overall

2.2 a Reasonable Limits and Notwithstanding Clause: Summaries of each

2.2 c Notwithstanding Clause Uses: list the times governments have implemented this clause. (Remember, this clause was added at the last minute to satisfy provincial leaders’ concerns, to ensure Federal government and courts didn’t hold too much power over provinces.)

a. Freedom of Conscience and Religion: Summary and Case summaries

b. Freedom of Thought, Belief, Opinion, and Expression: Summary and Case summaries

a. Life, Liberty, and Security of the Person

b. Search and Seizure Laws

d. Rights on Being Charged with an Offence

Looking at the different sections of the Charter, use either the Text for support or online sources to develop a clear summary of the rights/freedoms protected within each of the sections as well as a collection of Cases that have been tried in the court system to test the limits of each section.

Extension Questions: Questions we have from our discussion

Question to answer in your Comment: What understanding do you have now of Canada’s Supreme Court make up and whether it could be used by a government to predict decisions, as it often is in the States. In your opinion, can we trust the balance the courts offer against government power?

Law 30 07 Changing the Constitution – The Why

As Canada developed further as a country, it grew in population and diversity. Eventually, it was believed that protections needed to be included in the Constitution level of law to protect that diversity – thus the Canadian Charter of Rights and Freedoms.

Resources to Support Learning for This Section:

The general public likely has nothing to fear within the judicial system, but it would be naive to believe only guilty people are convicted of crimes. There are many examples of individuals found guilty of serious offences, including murder, serving a number of years in prison, only later to be exonerated and their convictions erased, because of new evidence revealed. Andy Rose is one such individual.

“Someone Got Away With Murder” Fifth Estate Documentary – how far can police go in pressuring a suspect to gain evidence to use against them in a trial? And at what cost?