It has likely been mentioned in class during the last Section’s discussion that, more and more, you as students are recognizing a difference between you, between males and females. Until recently, you may not have been quite aware of different treatments or expectations placed on you because of your gender. If your class participated in the open discussion between girls and guys about dating topics, wanting an honest opinion and perspective from the opposite sex, there is your proof that you’re not in a group as one anymore – that you are two groups of males and females learning together but experiencing lives outside of school that may be quite different from each other.

The last topic explored through literature for us this year is Gender Roles in Your Society/Future.

The roles of men and women in society are often used for comedic purposes. Here are two video parodies of topics that fall under this subject.

There are more consequential examples of the differences of experiences and expectations between males and females in society today. Here are some examples: 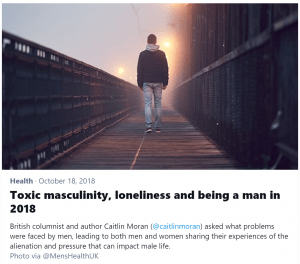 Gender is a construction – the idea of what it is to be male or manly versus female and feminine in your culture.
This is different than the biological Sex you are born as – male or female.

There are a number of older and newer documentaries that focus on gender issues for today’s society. Some of these concepts, the way males and females are viewed in society and the construction of these roles, have become established so gradually over time because of your exposure to them that they don’t seem dangerous. The dangers are there and they’re revealed by statistics: the amount of sexual assaults

on women or murder/suicides committed by men towards their wives and children, or the amount of steroid users among male teens and high suicide rates for males.

A number of appropriate documentaries have been assembled for you. Some include mature subjects and images, but they have been developed for classroom and educational use. View what you’re comfortable viewing – skip forward if there are upsetting images. You’ll be viewing a documentary on your own, so you have control over your choice and viewing.

After you’ve watched your documentaries of choice, you’ll participate in a class group discussion, to share the focus of the documentaries you viewed and personal responses you have as a result.

You’ll soon pick a topic of Inquiry or Research related to gender – a number of topics to consider are posted on the Blog Post that follows this one on the ELA 20 page.